Guineas weekend brought with it a real buzz this year as some red-hot reputations went on the line, and whilst the big match-up ended up as the race for second the whole thing set the scene for a fascinating summer of clashes. It's certainly not scores settled in the mile division by any means and Dominic Gardiner-Hill gives his take on standings so far.

So were we all expecting too much, writes Dominic Gardiner-Hill. It looked one of the strongest fields for many years for the Qipco 2000 Guineas but was our expectation that we might see a stellar performance that signalled the arrival of a new superstar misplaced?

As it turned out a barely-considered 40/1 shot, apparently the stable third string, blew a hole (possibly temporary) in a number of big reputations and left many feeling a little deflated. But now that the dust has settled, what should we make of Saturday's race?

I have decided to go with a figure of 120 for the winner Night of Thunder which is an improvement of 11lb from his pre-race figure of 109. From a form and ratings perspective my options were to look at the pre-race marks of runner-up Kingman (118), third-placed Australia (117) and fifth-placed French challenger Charm Spirit (113).

Taking either of the first two would have made Night of Thunder's performance the same as 2012-winner Camelot's figure (119) and I feel that given the apparent strength of the opposition Richard Hannon's colt deserves to be rated higher than that.

The slightly disappointing aspect of this figure is that it's only the joint-seventh-best Guineas winning performance in the last ten years (on a par with Cockney Rebel in 2007), and only the joint-ninth-best since the turn of the century.

There is some good news as well, however. The impression before the race was that it was a contest with strength in depth and I still believe that's the case, with the first nine having won a combined total of 27 of their 33 previous starts. It was impossible to know exactly what Kingman achieved when scooting home in the Greenham and credit to my colleague Matthew Tester who plumped for a figure of 118, but Saturday's performance is surely his best effort to date and that is reflected in an adjusted rating of 119.

As such, it is the joint-second-best performance by the runner-up in a Guineas since the turn of the century, bettered only by New Approach's 120 when second to Henrythenavigator in 2008. Australia (also 119) adds further kudos to the form and put up the best performance of a third-placed horse during the same period, bettering the 118 achieved by the mighty Canford Cliffs behind Makfi in 2010.

Further evidence for the strength in depth argument is provided by the number of horses putting up performances of 110+ in the race. After a nadir of just two the previous year, the first nine home on Saturday have been credited with performances of 110 or better, a record for the contest since 2000, bettering the figure of eight achieved in both 2003 (Refuse To Bend) and 2010 (Makfi).

So, as the song title goes, there are 'reasons to be cheerful'. Night of Thunder may not have achieved the sort of figure many of us at Newmarket had hoped the winner might attain and, yes, it was a messy race with the field splitting into two groups, but he deserves a lot of credit for winning one of the most competitive Guineas of recent times - one from which I expect the form to prove rock solid as the summer progresses.

Newmarket hosted the first 5f pattern race of the British season in the shape of the Pearl Bloodstock Palace House Stakes on Saturday, writes Chris Nash. The Group 3 contest saw several regulars in this type of event take their chance and the finish was fought out by the two oldest horses in the race, with the seven-year-old Sole Power beating the nine-year-old Kingsgate Native by half a length.

The winner was top-rated pre-race with an Irish mark of 114 and proved the point in seeing off Kingsgate Native and Hot Streak (both 112 pre-race) with a further neck back to the 111-rated Stepper Point. As you can imagine, there wasn't much head-scratching needed to put figures on the form. 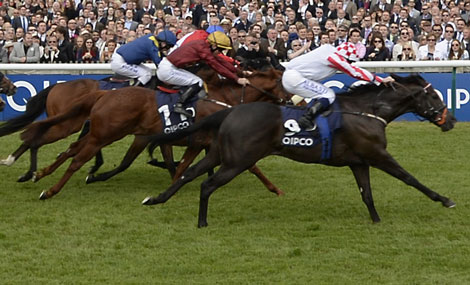 I called Sole Power's figure 114+ given he had to switch for a run and still needed nothing stronger than hands and heels to prevail, and made a case to my Irish colleagues for raising his rating to 115. The second and fourth ran bang to their marks, whilst the three-year-old Hot Streak improved to 115 under a 3lb penalty for his Cornwallis success. He's evidently improved since a successful juvenile season and looks booked to play a part in all the major 5f races this term.

Coincidentally, Sole Power and Kingsgate Native had fought out the Palace House last year (a length separated them) and the latter went on to gain revenge in the Group 2 Temple Stakes later in the month. Haydock could well be the next stop for both.

WILL TAC BE BACK FOR GOLD?

The previous two runnings of the Group 3 Longines Sagaro Stakes have provided the winner of the Gold Cup at Royal Ascot, and there's a decent chance of Tac de Boistron making it three in a row, writes Stephen Hindle.

Connections have stated that Tac de Boistron requires some juice in the ground, but assuming he returns to Berkshire for the Gold Cup next month, there are several reasons for thinking he'll make a bold show despite the fact I left his rating unchanged at 117.

Firstly, his rating looks a minimum. Earth Amber holds down the form of the Sagaro as she was rated only 95 going in, but Tac de Boistron beat her easily by five lengths and was also conceding her 10lb. I've raised Earth Amber to 100 on the back of this as, while I felt she deserved to go up, I'd be uncomfortable with having her higher at the minute, but the Sagaro could still be rated higher on everything else in the race.

Secondly, this is one of three races where we have Tac de Boistron running to 117 so he's certainly no one hit wonder in that sense. The other two were the Prix Royal-Oak at Longchamp and a listed race at Chester, and the latter could be rated higher still as the second, Cubanita, is now rated 111 and was beaten eight lengths by Tac de Boistron when in receipt of 5lb.

Sticking with the ratings theme, Tac de Boistron's mark is already more than good enough to see him right there in a Gold Cup - 117 is bang on the average for the last three winners. He also has a comparable mark to the other horses currently trading at a single figure price for this year's race.

He clearly has a liking for the track and he also ticks the stamina box having finished second in the Prix du Cadran at Longchamp last October, where we had him running just a couple of pounds below his best.

It's difficult to imagine anything else from the Sagaro being seriously involved in the Gold Cup, as Tac de Boistron not only won easily but was conceding weight all round. Harris Tweed went off favourite and, on a mark of 112 and in receipt of 7lb from the winner, was top on adjusted figures but he finished last.

His trainer blamed the poor run on the fact the jockey had gone for home too soon, but this was a disappointing performance even so. Bearing in mind this was clearly not his running, and the fact he's the only one of the first four from the Long Distance Cup to have run since, I left Harris Tweed on 112.

The reasoning behind Marracudja's new rating

A Fighting seventeenth for the north

Griffiths eyes autumn Group One after another fine run at Goodwood.

Hugh has three selections plus analysis online for Monday.

The Johnston yard is synonymous with success at the Qatar Goodwood Festival and we get the lowdown from Charlie Johnston on their representatives this week.
bet365
Sign up to bet365. Click to View Bonus Code Details