ladbrokes
Get £20 in free bets

Claim Offer
SPLASHING THROUGH THE MUD

Another abhorrent week on the weather front wreaked havoc with the National Hunt programme mid-week but the two headline fixtures on Saturday stood firm and made for informative, if at the same time gruelling, viewing. It was a day where several novices performed with distinction and, led off by Splash of Ginge's surprise success in the valuable Betfair Hurdle, our NH team give their explanation of their updated ratings.

HATCH THE WAY TO DO IT

How Saturday's Betfair Handicap Hurdle at Newbury managed to survive such a turbulent week weather wise was a tribute to all concerned at the track, writes David Dickinson.

The fact that the race was run on heavy but holding ground could hardly have been a surprise but in those conditions those who raced close to the pace did seem to be favoured. None more so than the winner, the 33/1 outsider Splash of Ginge, who made much of the running under an enterprising ride from 7lb-claimer Ryan Hatch. With a fleet of well supported horses bearing down on him in the closing stages he maintained the lead he had retaken from Act of Kalanisi early in the straight to gain a hard-fought success. 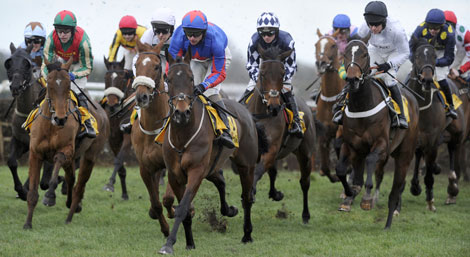 With both the third, Irish Saint and sixth, Alaivan theoretically well in the form was not straightforward to assess but I ended up using seventh home Chris Pea Green as my benchmark and raised Splash of Ginge 8lb to 142. With the benefit of hindsight, his Aintree success three outings back was probably the pointer to this showing, for all it was hard to know just what he'd achieved that day with the second and third home yet to run again. For whatever reason, he then ruined his chance by failing to jump fluently at Ascot the next time behind Irving and then came unstuck over a longer trip at Warwick.

On the juvenile front, the Cheltenham prospects are bubbling up nicely. Broughton confirmed the promise shown at Doncaster when taking the listed John Smith's Scottish Triumph Trial at Musselburgh, Harristown looks a likely contender for the Fred Winter after taking Huntingdon's 32Red Hurdle (formerly the Chatteris Fen) and last but certainly not least, Calipto backed up Paul Nicholls' assertion that he's the yard's best juvenile by impressively defying a 10lb penalty and is now rated 149. He is the joint top-rated British juvenile, alongside Le Rocher.

Dodging Bullets did his Racing Post Arkle prospects no harm despite suffering the first chase defeat of his career in the Grade 2 Betfair Cash Out Game Spirit Chase at soggy Newbury on Saturday, writes John de Moraville.

In fact, in my book, whilst narrowly outgunned by the more experienced Module in a thrilling duel, the six-year-old notched the best performance of his career so far.

Taking third-placed Raya Star (149) as the marker, I have raised Dodging Bullets, who was conceding that rival 5lb, by 1lb to 156.

Module (157), receiving 3lb from the runner-up, was best in at the weights and did not need to run to his mark to win, thereby gaining rich consolation for his last-strides defeat by Somersby in Exeter's Haldon Gold Cup back in November.

Over at Warwick, Raya Star's stable companion Balder Succes (151) staked his Arkle claims with a slick-jumping victory in the Grade 2 Star Sports Kingmaker Novices' Chase. His three-and-a-half-length defeat of Brick Red earned him a 6lb rise to a mark of 151, which is a couple of pounds higher than he'd managed over hurdles.

The reasoning behind Marracudja's new rating

A Fighting seventeenth for the north

Kate Tracey tackles Sunday's Palcepot at Market Rasen, while a win and place bet at Newbury and a Tote Swinger at Ripon also catch her eye.

The La Teste de Buch trainer is based in Deauville for August, where he is well-represented at forthcoming fixtures, and has a promising group of juveniles for the autumn.
bet365
Sign up to bet365. Click to View Bonus Code Details