Racing has been staged on the current site of Carlisle Racecourse since 1904 and the track has the claim to fame of being the first in the UK to host pool betting when the Tote opened for business at the track in 1929.

A right-hand course with a stiff uphill finish, Carlisle stages racing both on the Flat and over jumps. The feature races on the Flat, the Cumberland Plate and the Carlisle Bell are both held at their June fixture. The Cumberland Plate, first staged in the 1842, is run over one mile and three and a half furlongs for three-year-olds and upwards whilst the one-mile Carlisle Bell dates back even further than the Plate to 1599 and the name of the race originates to the prize that was awarded to the winners.

Over jumps Carlisle has emerged as a popular course among trainers in the north and south and the track’s feature race, the Colin Parker Memorial Chase, run over two and a half miles in November, has been won by the likes of Many Clouds, Tidal Bay and Monet’s Garden in recent years. 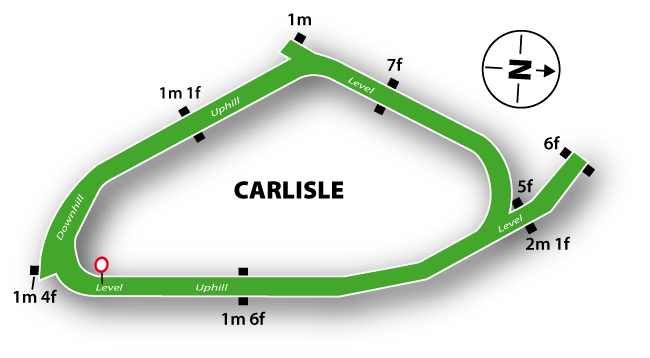 Right handed, galloping. The pear-shaped course is just over a mile and a half in extent, with a stiff uphill finish of just over three furlongs. In races over seven furlongs and further, a prominent position on the home turn is often an advantage, with those racing up the centre of the home straight favoured. Although the turns are easy, it provides a stiff test of stamina, especially for two-year-olds. When the ground becomes testing, jockeys inevitably switch to the better ground on the stand side.


You don’t see much trouble in the last couple of furlongs of staying races at Carlisle and that’s due, in part, to the fact that the ground drops away dramatically from about a mile and three out. Having an injection of pace at that stage obviously means you sort the wheat from the chaff quite early on, so fields usually thin out before the closing stages. It’s different in sprints, with the horses often fanning out. Whatever the trip, though, Carlisle takes some getting. It’s a fair old climb up that finishing hill. 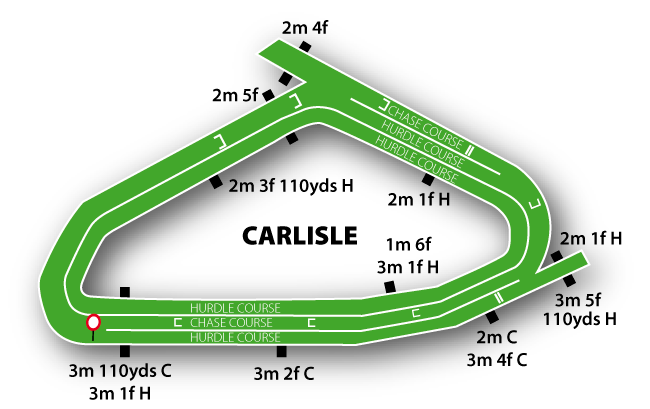 Right handed, undulating, most galloping. A notably stiff track on account of the home straight being uphill, though as a consequence many races are steadily run with riders keen to conserve their mount's energy. Fences are the easiest in the country. Almost invariably extremely testing ground in mid-winter.


Carlisle is a really lovely course, a good, galloping track that attracts an awful lot of nice horses from big stables, and Jonjo O’Neill, who used to train nearby, has always loved it. There are a couple of bogey obstacles, though, which can get your mount thinking about what it’s doing. The first in the home straight can test a horse, particularly a novice, because you run downhill to it after coming off a bend. The same is true about the first in the back straight and both those, while fair, demand respect.