Situated on top of Haldon Hill, Exeter racecourse is considered to be one of the fairest National Hunt tracks in the country. Initially popular as a summer-jumping venue (when the track was officially titled Devon and Exeter) there has been a definite shift towards better quality racing over the last two decades and the course now races from October to May. The excellent drainage and galloping nature of the course make Exeter a popular venue to run a novice chaser.

Highlight of the year is the Haldon Gold Cup, a two and a quarter mile chase run in early November. The race has been won by some of the great names in steeplechasing including Very Promising, Barnbrook Again, Viking Flagship, Best Mate, Edredon Bleu and Azertyuiop. 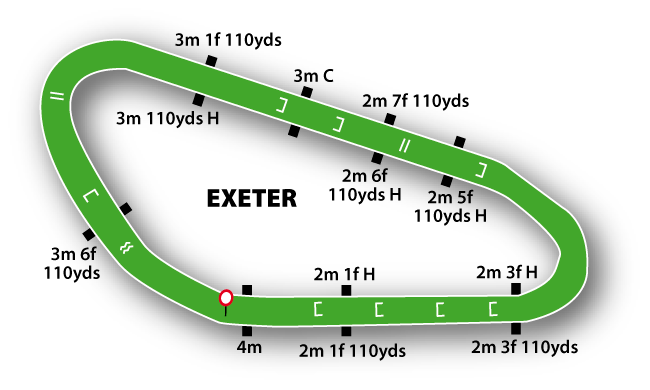 This is a hilly course, galloping in nature. Conditions can get extremely testing in midwinter and the exact opposite in drier periods, the course being without an artificial watering system. Its right-handed two-mile circuit is laid out in a long oval, with eleven fences and a run-in of around 170 yards. The chase course is on the outside of the hurdles one, but the inside track is often used on the home turn regardless of whether the races are over fences or not. The half-mile home straight is on the rise all the way to the finish.


Exeter is a beautiful track - in my opinion definitely one of the best in Britain - and it’s a great place to take a novice chaser. The fences are very fair and the ground is usually lovely. Years ago, they seemed to struggle to water around there, partly, I imagine, because the course covers such a vast expanse of land. But it holds its condition really well now and it’s a great place to ride. It’s a fine test of a horse - really good - and it shouldn’t surprise anyone that so many top trainers like to go there.