Racing returned to Hereford after a four year hiatus in October 2016. The course, which is within walking distance of the town centre, has always been a popular track for the powerful West Country and Lambourn trainers to send horses to learn their trade.

The course has also provided some racing firsts, in December 1991 Paul Nicholls saddled Olveston to victory, his first winner as a trainer and in April 1994 and Richard Johnson rode Rusty Bridge to victory in a Hunters’ Chase, providing the jockey with his first career win. 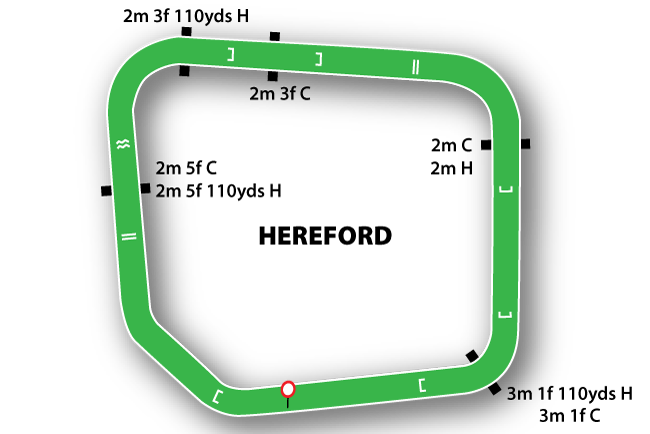 Hereford's right-handed circuit of about a mile and a half is almost square and has nine fences, of which the first after the winning post is taken on a turn. The home turn, which is on falling ground, is pretty sharp but the other bends are easy. Races have a tendency to be well run and the ground can get very testing in mid-winter. The course restarted racing in October 2016 after a four-year hiatus.


It’s great see Hereford staging meetings again, because it’s a track close to my heart. I rode my second-ever winner there, before partnering some horses around what has always been a very fair course. Whatever you’re on, over hurdles or fences, you need to be travelling nicely before the home turn because, if you’re not, others will get away from you once you start the downhill run into the home straight. You certainly don’t want to get too far behind at that stage. The final fence can be tricky and there used to be a fair few horses making mistakes there. After it – and after the last hurdle too – the track seems to widen out, which tends to make some horses wander. There’s a relatively short run-in but, because of the way the course opens out on you, it can sometimes seem like an eternity on a runner that’s getting a bit tired or looking around