Jumping action takes place throughout the year at Huntington with the highlight of its calendar being the Grade 2 Peterborough Chase.

Henrietta Knight dominated the extended two mile and four furlong race around the turn of the century, winning it an astonishing eight times. Gold Cup hero Best Mate won the race in 2002, while Edredon Bleu won the contest a remarkable four times in a row, starting in 1998. Impek won the 2005 renewal while Racing Demon took the contest in both 2006 and 2007.

Formerly ran on a Saturday in November, the race was switched to midweek in December in 2008 because of clashes with other big race meetings and dwindling fields, and a decision was made in 2009 to give the contest a permanent December midweek slot. 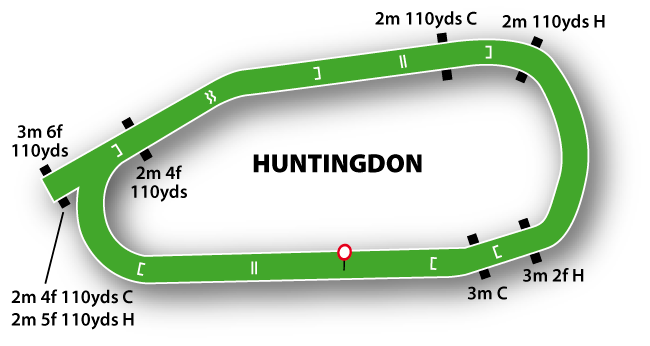 The course is right-handed, oval with easy bends, and is a flat, fast track about one-and-a-half miles in length. There are nine fences to a circuit, some of them rather tricky, and the water jump was filled in during summer 2008, astroturf replacing the water. It favours horses with speed over stamina, sluggards seen to best advantage only under extremely testing conditions.


You see a lot of good horses running at Huntingdon, especially classy types off the Flat, and that’s partly because it’s level, also because it’s close to Newmarket and not least because they put on some super races, from inviting novice hurdles through to the Peterborough Chase. It’s a very speedy track, but beautifully maintained with nice fences. Ideally, you want a horse that’s fast over the obstacles. You need to travel well to win there - and big, National Hunt types are definitely at a disadvantage.