Navan Racecourse is a dual-purpose track located 50km north-east of Dublin. First opened in 1920, it now plays host to a total of 17 fixtures throughout the year.

Navan boasts a strong National Hunt programme that includes a multitude of Grade 2 contests such as the Boyne Hurdle, the Lismullen Hurdle, the Fortria Chase, the Monksfield Novice Hurdle and the Navan Novice Hurdle. Widely considered one of the fairest tests of a National Hunt horse in Ireland, Navan has played host to an array of previous and future Grade 1 winners over the decades.

On the Flat, the Group 3 Vintage Crop Stakes in May is the centrepiece and it has developed into one of the leading Ascot Gold Cup trials in Ireland. Previous winners include Yeats (twice), Fame And Glory (twice), Leading Light and Forgotten Rules.

A left-handed oval of one and a half miles and it has a stiff finish of three and a half furlongs. There is a straight course of just under six furlongs that joins the main track on the entrance to the straight.


Navan is a very fair track with a very stiff finish. The main factor to bear in mind is just how stiff it is and that a horse with questionable stamina can be exposed there. A horse can win from any position on either the round track or the sprint tracks and the draw isn’t a huge factor on either. On the whole, it is as fair a track as there is the country really. 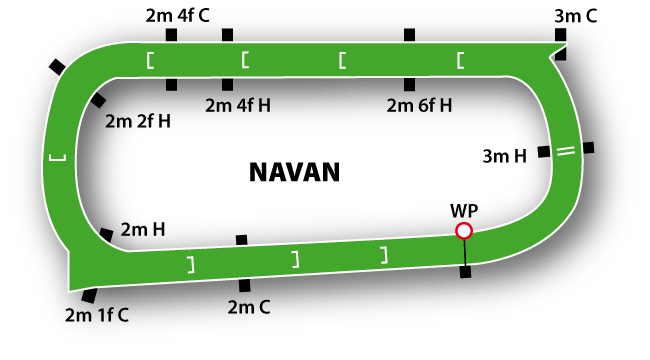 A left-handed, rectangular track with a circuit of a mile and a half. It is generally galloping in character with a stiff, uphill finishing straight of around three and a half furlongs. Conditions can become very testing on soft or heavy ground and ability to see out the trip is crucial. The chase course, which is outside the hurdles track, has nine fences to a circuit, with three fences jumped in the home straight and a run-in of around a furlong. The fourth-last fence is followed almost immediately by a turn.


Navan was always my favourite track. For me it is the fairest track in Ireland. There is plenty of room and there are never hard-luck stories there. The fences were always very good, with the first one down the back and the second-last perhaps being the trickiest. It is one of the stiffer tracks in the country and there is no hiding place. It’s a big help to get a breather into them down the back, as it really is a long way home in the straight. During the winter, it can get very heavy, proper winter ground.