Located in the leafy Surrey suburb of Esher, Sandown Park stages top quality racing on the flat and over jumps throughout the year. The course has three distinct highlights; the Bet365 Gold Cup in April, the Eclipse Stakes in July and the Tingle Creek Chase in December.

The Bet365 Gold Cup, originally run as the Whitbread Gold Cup, is the feature race on the last Saturday in April, a fixture which heralds the end of the National Hunt season and also includes the Grade 1 Celebration Chase.

Sandown’s sole Group 1 race in the Coral-Eclipse, which is run over a mile and a quarter in early July and invariably attracts a top quality field, as is highlighted just by looking at the roll-of-honour since 2000, which includes star performers Giant’s Causeway, Falbrav, Sea The Stars, Nathaniel and Golden Horn.

The Tingle Creek Chase holds similar status over jumps as it is the natural target for any top two-mile chaser. The Grade 1 contest, held in early December, has star three-milers Desert Orchid and Kauto Star among its winners alongside Viking Flagship, Flagship Uberalles, Moscow Flyer, Maser Minded, Sizing Europe, Sprinter Sacre, Sire De Grugy and Sprinter Sacre – each of whom when on to win the Queen Mother Champion Chase. 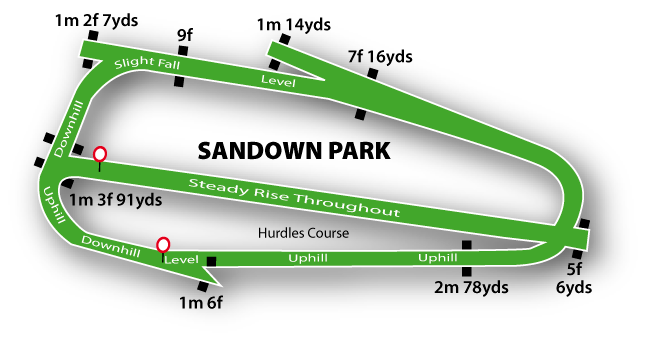 Right handed, oval-shaped course thirteen furlongs in length with a straight of half a mile. Essentially a fair, galloping course which places the emphasis on stamina courtesy of a gradual climb from the home turn. On soft ground the jockeys sometimes tack across to the stand side in the straight and this can lead to horses racing wide apart. The five-furlong track runs across the main circuit and rises steadily throughout.


There’s no doubt it’s a big advantage being on the far rail up Sandown’s sprint course and a lot of horses drawn badly, even in medium-sized fields, fail to get into contention. It can be tricky in a finish, too, with a lot happening in the final furlong, and there’s no surprise that it lends itself to front-runners. They always seem to go quick down the back on the round course, and it’s quite a long way from the bottom of the hill to the winning post, but horses really stretch out on that kind final rise to the line. 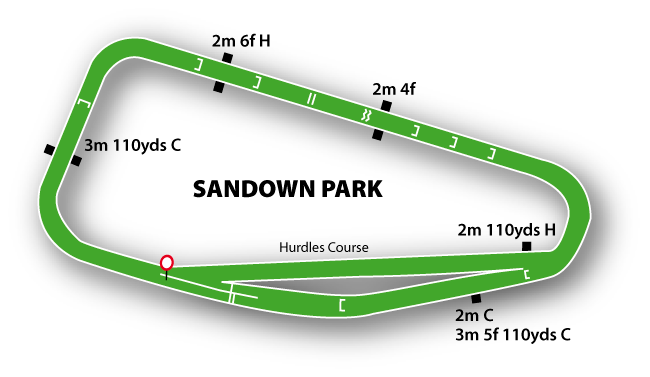 Right handed, galloping. Regarded as the one of the best jumping tests for chasers in the country, thanks chiefly to the seven fences in the back straight, the last three of which are situated close together; however, has one of the lowest casualty rates, fallers in the home straight being very rare. Hurdles course often more testing than chase one during winter months, with gruelling conditions sometimes the order of the day. Front runners more favoured on the chase track, where it can regularly prove hard to make up ground when conditions place the emphasis on speed.


It’s a beautiful course to ride, especially down the back straight. Tactically, though, it’s vital to get into position before you get into the bend turning towards the home straight because, if you’re trying to improve your position there, it can lose you the race. The fences in the back straight, especially for a novice, put the emphasis in adaptability. They come at you pretty quick and they can break the rhythm of an inexperienced horse. Some say that, if you meet the first one right, you’ll meet them all right - but that’s not true. If you meet the first one spot-on, the chances are you’ll either be too long or too short by the last. Sandown’s run-in, although not especially long, can be very demanding, especially when the ground is soft. Horses get lonely on it and you see plenty wandering off-line, wondering where they’re meant to go.