Having raced as a jumps-only venue for most of its history, Wetherby became a dual-purpose track in 2015 when its first flat fixture took place on 26 April. The course staged Flat fixtures throughout the early spring and summer in 2015, with the track having a break until the return of jumps racing in October.

Wetherby’s feature meeting is the late October / early November fixture which stars the Grade 2 Charlie Hall Chase. The Grade 2 contest is the first quality three-mile chase of the season and its roll of honour includes some of the great long distance chasers including Wayward Lad, Burrough Hill Lad, One Man and See More Business.

Supporting races on the card include the West Yorkshire Hurdle – won in 2014 by future champion Cole Harden – and the Wetherby Mares’ Hurdle, whilst other significant races staged at the track are the Rowland Meyrick Chase at Christmas and the Towton Novices’ Chase in February.

Left-handed, the Flat course shares the hurdles course and is approximately a mile and a half in circumference. There is no straight sprint track, and because of the bends, 5½ furlong races start on a chute near the end of the back straight.


I’ve been taking a keen interest in Wetherby since it was given the green light to stage Flat racing and it looks good, a smashing track. The jockeys who’ve ridden it give it the thumbs-up and it seems you need to be handy. A prominent style of racing looks the best sort to employ, with aggressive tactics generally appearing to pay off. The jumps course has long had a reputation for being sharp, suiting speedy horses who like to be close to the pace, and that certainly seems to be the case for the Flat races so far. 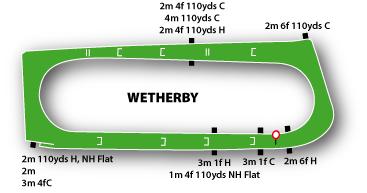 Left handed, galloping. Now restored to nine fences to a circuit, though the four in the home straight have been switched to the inside of the hurdles track after problems caused by the realignment of the nearby A1. The signs are the fences still punish those who aren't accurate. It's a very fair test for any horse but is ideal for the free-running, long-striding sort.


It usually pays to be handy when riding at Wetherby, because it’s a quick track, even more so since the changes caused by the A1 redevelopment a few years back. There was a time when some trainers thought the fences were tough for a novice, but that has changed dramatically now and it’s a very fair course, with lovely obstacles, nowhere near as stiff as in the ‘old days’. Ideally, you’d like to save a bit for your finishing kick, but you certainly can’t afford to give any front-runners an easy time of it.