Wincanton host Jump racing throughout the winter with the stand-out feature being the Kingwell Hurdle. Run over two miles in mid-February, the Grade 2 contest is a key Champion Hurdle trial, and the last one in the calendar. Several horses have won the Kingwell Hurdle then followed up at the Festival in the same season including Bula (1971 & 72), Lanzarote (1974), Kribensis (1990), Alderbrook (1995), Hors La Loi III (2002) and Katchit (2008). Other exceptional horses to win the race include Desert Orchid (1984), Azertyiuop (2001), Inglis Drever (2005) and Binocular (2012).

Wincanton also stages a valuable card in early November. The feature handicap is the listed Badger Ales Trophy, run over an extended three miles and one furlong, and it is supported by the Grade 2 Elite Hurdle and the two mile five furlong Rising Stars Novices Chase. 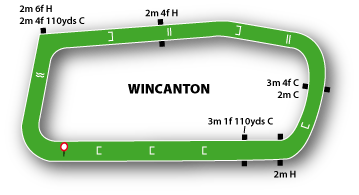 Right handed, flat and essentially sharp in character. One of the sharpest tests in the country when the ground is firmer than good, hold-up tactics usually counter-productive, but on very testing going the course can provide a surprisingly thorough test, often resulting in strung-out fields and a low percentage of completions, especially on the hurdles course, perhaps a cause of its fundamentally tight nature ensuring races are well run regardless of conditions, front runners often overdoing things. The fences are stiff and claim plenty of casualties, with the three in the home straight coming so close together that it often proves difficult to come from behind.


Wincanton is a very fast course and you really do need a horse that travels around it. The two-mile track there is one of the quickest in Britain and you run downhill virtually all the way from the home turn. If something poaches a lead turning in, chances are it won’t come back to you, so jockeys have to be very careful about positioning. Letting a rival get away from you at that point, especially one with stamina, can be disastrous. It’s certainly not unusual for the one in front at the second-last to stay there all the way to the line.