One of three racecourses in County Tipperary, racing has taken place at Thurles since 1732 and it has long been considered a highly-important asset to Irish National Hunt racing. The reason for this is that the remarkably resilient ground there can be raced on after all but exceptional amounts of rainfall and it can withstand a large amount of racing during the winter months. It host 11 fixtures between October and March every year.

Thurles plays host to three Grade 2 contests, with the Kinloch Brae Chase in January being the most high profile. It has been won by the likes of Native Upmanship (three times), Newmill (twice), Hi Cloy and Don Cossack. 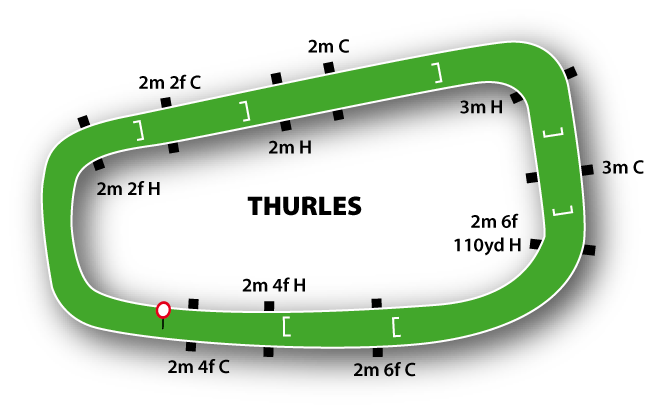 An undulating, right-handed track with a circuit of around a mile and a quarter. Sections of the track are uphill but there is a fairly steep descent to the two-furlong home straight and the track is very much sharp in character, favouring the handy type of horse. There are seven fences to a circuit of the chase course, with two in the home straight, and a run-in of around a furlong. The course is remarkably well drained and as a result, very few meetings are lost due to adverse weather conditions.


Thurles is a grand track to ride. You have to give your horse a chance coming up the hill in the back straight or you’ll struggle to get home otherwise. The ground at Thurles really is amazing, as it never gets too deep. Even in the worst of the worst weather, they still only go in five or six inches. There can often be some even better ground out a bit wider and that is something worth considering, especially towards the backend of a card when the ground on the inside is chopped up.

15:30 Best Wishes For The Festive Season