Meetings are staged throughout the heart of the jumps season from September onwards with the track’s two feature days falling in January and February. The former, usually falling on a Saturday in mid-January, features the Grade 3 Classic Chase, a handicap over three miles and five furlongs that invariably attracts a strong field and has been won by the likes of Hey Big Spender, Shotgun Paddy and Hawkes Point in recent years. It is supported by the Grade 2 Leamington Novices’ Hurdle run over two miles and five furlongs; past winners include Inglis Drever and The New One.

The Kingmaker Novice’s Chase, run over two miles in February, also has a fine reputation of highlighting future stars and is regarded as a trial for the Arkle Chase. Past winners include Flagship Uberalles, Voy Por Ustedes, Long Run and Finian’s Rainbow. 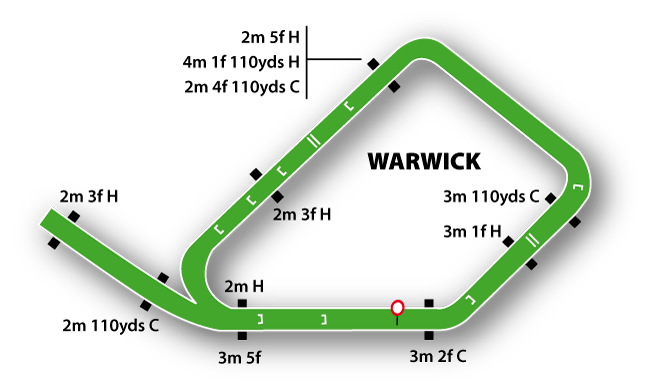 Left handed, and flat with the exception of a fairly steep climb soon after the winning line which descends in gradual fashion to the turn into the back straight. Essentially a sharp track by virtue of the tight bends, notwithstanding a long back straight. Widely regarded as a tricky jumping track on account of five fences coming in quick succession in the back straight, but the casualty rate is one of the lowest in Britain. The tight nature of the course results in front runners/those ridden prominently tending to do well on both courses.


Warwick is very much a speed track and, largely due to that reason, I rate it one of the toughest in Britain for a novice. It’s not unknown for an inexperienced horse to panic round there, as the fences come at them so quick, and the undulations don’t make it any easier. The hurdles course is especially sharp and, not surprisingly, ex-Flat horses often do well. There’s no point thinking you can get away with running a non-stayer in the long-distance chases, though, because they invariably go an end-to-end gallop.